The first guest on Grow! with Katie is Joe Lamp’l, the famous “Joe” behind the gardening-intensive website, JoeGardener.com. 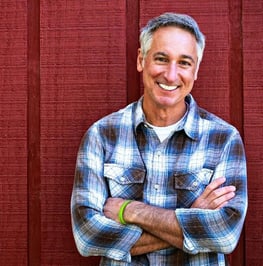 Katie and Joe talk about his love for gardening, which came from a young age when he had a run-in with his parents’ favorite shrub. He shoved the broken branch into the ground and a few weeks later, the branch had taken root, and so did his interest for horticulture.
Joe’s website focuses on how-to videos, podcasts, online courses (which are part of his Online Gardening Academy), and blog posts around the most popular topics gardeners want to know.

Joe has been the friendly-face of many different shows like PBS’ Emmy-award winning home improvement show, Growing a Greener World, which he is the creator, executive producer and host, and was the host of the old DIY Network show, Fresh from the Garden.

He is also the creator of one of the biggest and most active gardening Facebook groups, Joe Gardener, with almost 30k subscribers. Join today!

He is author of the Green Gardener’s Guide and an eBook, 5 Steps to Your Best Garden Ever: Why What You Do Now Matters Most, which can be found on his website.

Joe is the holder of many awards and recognitions including:

• The American Horticulture Society’s B.Y. Morrison Communication Award, which recognizes effective and inspirational communication through print, radio, television, and online media.
• He is a multi-award winner for Best On-Air Talent for Television by the Garden Writers Association.
• The Taste Awards for Breakout Storyteller of the Year, Best Environmental Television, Series Film or Video, Best Branded Television Series in 2016, and their coveted Pioneer Award in 2017.
• In 2018, Growing a Greener World was awarded a Daytime Emmy for Best Lifestyle Program.

We hope you learn more about Joe today, and how to start and grow your own garden at home.

Did you miss today’s episode of Grow! With Katie? Watch it here!