Exactly How Important is Public Relations?

In the late nineteen twenties the two largest manufacturers of breakfast cereal, Kellogg's and Post, were vying for the hearts and wallets of the American people. But with the Great Depression looming in the distance, and spending on the top of everyone's minds, only one company could come out on top.  Can you guess who? 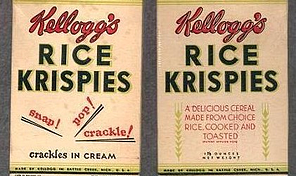 It is of course, Kellogg's.

The reason: Kellogg's increased quality and quantity of marketing during the Great Depression.

Their rationale was simple, Post scaled back their marketing efforts significantly, thus opening the door for Kellogg's to step right through.

There are numerous studies that prove cutting spending doesn't work, yet, in our latest downturn, most companies end up behaving more like Post. Writer James Surowiecki highlights such studies in his article “Hanging Tough,” published in The New Yorker magazine, "The benefits from recession investment are often surprisingly long-lived, with companies maintaining their gains in market share and sales well into economic recovery."

No matter the economic times, it’s imperative that you keep your marketing and public relations efforts up and continue networking & establishing strategic partnerships to keep your name & brand in the forefront.

We are not suggesting that companies need to spend more, but instead, increase the quality and effectiveness of the messaging.  As with all marketing efforts, give your customers a clear call to action.  Tell them exactly what you want them to do using visuals and simple language.  Make a clear difference between your solution, your competitor’s solution and doing nothing.

Even when the economy cratered in the early 1930s, Kellogg’s profits rose 30%. They used that momentum to become the industry’s dominant cereal company.

The lesson from this legendary industry competition is very basic and should be applied today: companies that do well in times of economic downturn are the companies that have steady marketing campaigns, create demand for their product and increase brand name recognition.

Want to find out how branding, marketing and public relations could work for your garden business?  Download our latest case study on Branding.