As I am sure you've heard, Bonnier Corporation announced that the April issue of Garden Design would be its last.

Garden Design has always been one of our favorite magazines, so we wanted to be sure we penned a valiant, fitting farewell.

Below is Garden Media Group's tribute to Garden Design.

We're outlining the history, the end, and our favorite aspects about Garden Design.

Share in the memorial by commenting your favorite moments.

Garden Design's seed was planted in 1994 when the first issue was published by Meigher Communications. Before this, Garden Design was a small, struggling landscapers' association title. Meigher helped put Garden Design on the map, and in just three short years, Garden Design Magazine began to turn a profit.

Up until this year, Garden Design published seven times a year to print circulation of a surprisingly low 185,741 readers.

This news is shocking, but comes as no surprise as the future of print publications seem murky.  It's clear this announcement was based on finances, in 2012, Garden Design sold only 189 ad pages. Bonnier Corporation got a new CEO last month, Dave Freygang. Freygang took a hard look at the numbers and sales of each magazine in order to do what was financially smart for Bonnier.

In an official statement, Freygang commented, "The economic climate, compounded by the significant industry transition to digital, have limited the growth in advertising needed to make this brand viable for our future."

Garden Design Magazine was always on the cutting edge of everything and anything gardening related. New plants, new designs, new ways to modernize gardening, Garden Design had it all. In my mind, Garden Design and innovation were interchangeable.

When debuting a new trend or plant, Garden Design never skimped on the details. They walked you through it every step of the way. I kept all of my Garden Design magazines for future reference because their eye for detail never went out of style.

The make-over Garden Design experienced in 2010 was just what it needed! Finally, the magazine looked and felt like it was moving forward. Around this time, the pictures became an absolute delight. I could have ripped nearly any page of Garden Design out and hung it on the wall. Honest, the pictures were breathtaking.

The Garden Media Team and myself will greatly miss Garden Design Magazine. We'll be savoring that April edition like no other and visiting the magazine's website on the daily to cram as many of Garden Design's ideas, tutorials, and innovation into our mind's before it's final day.

Stick with Garden Media Group, and stay one (or ten) steps ahead of the trends with our 2013 Garden Trends Whitepaper below. 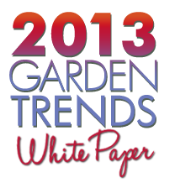 Special thanks to MoneySavingMom for the Garden Design Magazine cover.