Grow! with Katie Guests Bree the Rooster and Friends

Today on day two of Chicken Week on Grow! with Katie, we have a very special guest, Bree the Rooster! Along with Bree is his owner/companion Camille, and their animal photographer, Janet Holmes! 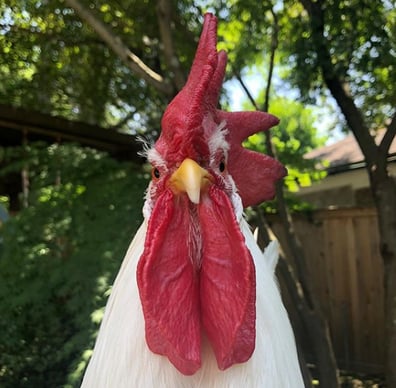 Bree was found on the streets of New York City wandering all alone as a chick. Camille took in the chick, not knowing what was to come! After about three weeks with Bree, Camille discovered that he was in fact a rooster. There is law against owning roosters in NYC so Camille made the big move back to her home in Ohio, to not be separated from her new feathered family member.

Janet is an animal photographer who has been photographing Bree since he was just a chick. Their bond is so strong that he can recognize her from across the street and knows her voice. Follow her Instagram account!

Janet has a book out, Nest: Rescued Chickens at Home, which features Bree and many other magnificent chickens. Check it out here!

On today’s show, we learned about Bree and Camille’s story of becoming family, how she cares for him inside the home, some tips for getting started with roosters, and Janet shared some great tips for taking photos of animals!

Watch this episode of Grow! with Katie with Bree the Rooster, Camille his companion and Janet Holmes!