Now that you have created your media list, it will serve as the foundation for all of your media relations. You're ready for the next step: connecting with the key media influencers.

Key influencers are the best place to begin making connections.

Because they're leaders in their industry. The topics that they write and talk about will soon be covered by media outlets across the country. Think of it like a ripple effect. If you can hook the big influencers, the rest of the media coverage will soon take off.

Below are tips on determining who exactly key media influencers are--and how to make them remember your garden brand!

What is a Key Influencer?

A key influencer is a leader in your industry. They have a lot of power, many followers, and they're always on the cutting edge of trends.

When you're just starting your media relations plan, key influencers are the ones whose product endorsements matter the most.

These change makers may be a face you recognize from a popular morning talk show. Or, they may be faces you've never actually seen before, like the garden editor of Real Simple or a digital influencer on Twitter.

Where are the Key Influencers? Your garden brand has to make connections in all arenas. The more media outlets that share your company's vision and message, the quicker your consumers will learn to trust you and your brand.

How to Connect with the Influencers To Learn How to Best Connect with Key Media Influencers, Download "How to Win the Media's Heart" Below! 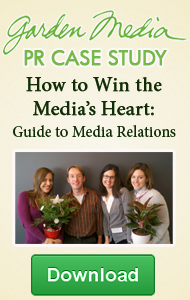